The BBC Magazine has recently run an article about a remarkable aircraft – the Rotodyne. It was a hybrid between a helicopter and a turbo-prop airplane. There is also an article about it on Wikipedia, and a short one at pilotfriend.com. 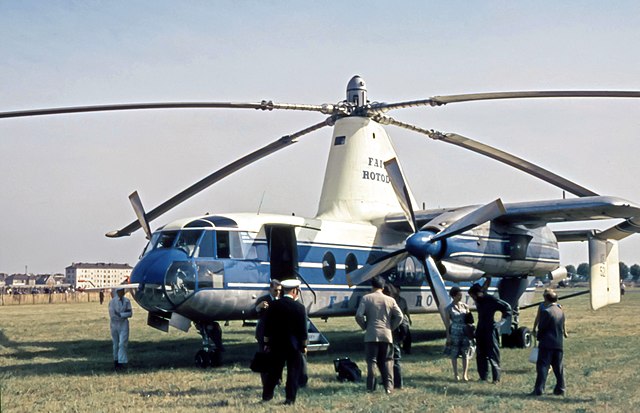 It was designed for taking off vertically and then traveling horizontally. Thus, it had a large, four-bladed rotor (with tip-jets) and two turboprops mounted in the fixed wings.

It was designed and built in the 1950-ies by Fairey Aviation and intended for commercial and military applications. As can be seen from the images below, it had remarkable carrying capacity.

The development was government funded, and when the British government decided to drop it – the project came to an end. It was claimed that cancellation was due to excessive noise that the craft generated. According to the Wikipedia article, the engineers apparently were able to reduce the noise levels, but it was too late in the project timeline. After the program was terminated, the Rotodyne was dismantled. “A single fuselage bay, as pictured, plus rotors and rotorhead mast are on display at The Helicopter Museum, Weston-super-Mare.”

Followup:
Another article on BBC Future (May 2016), Why helicopter airliners haven’t happened yet, attempts to explain the advancements and the difficulties with rotor-based vertical takeoff and landing. The modern approaches seem to focus on tilt-rotor designs. However, to me, there seems something inherently right in the separate layout of the Rotodyne. May be it is just aesthetic.